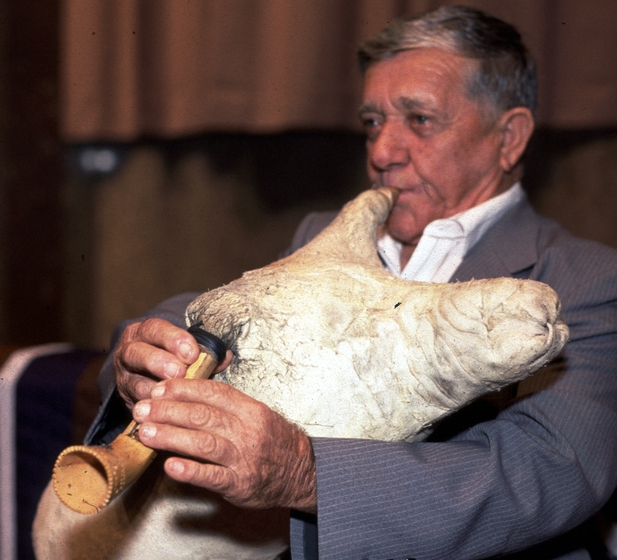 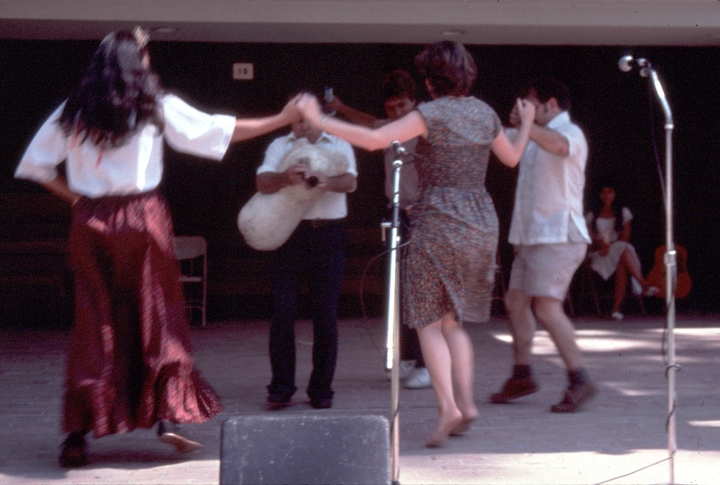 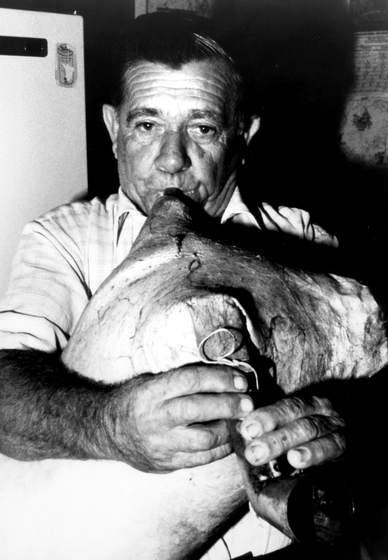 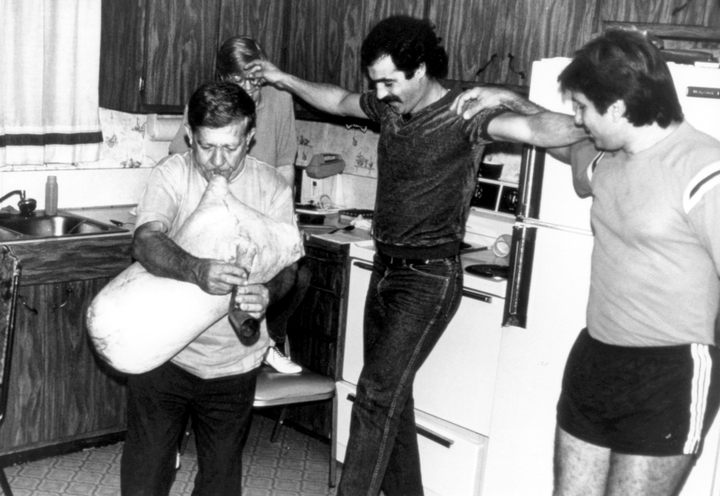 Nikitas Tsimouris was a native of Kalymnos, in the Dodecanese, a group of Mediterranean islands belonging to Greece but lying off the Turkish mainland. Like others in the Dodecanese, the Tsimouris family derived its livelihood from both sea and land by fishing, sponge diving, raising small herds of goats and sheep and farming, cultivating olives, grapes and other fruits.

As a young man, Tsimouris learned to play the Greek bagpipe, the tsabóuna, from his father and other male relatives, who often played the instrument to pass the hours while tending their animals. The tsabóuna is usually made from a goatskin (tragéois), wood and string. These components are held in place with beeswax and onionskin. The air bag of the instrument (touloumi) is a goatskin turned inside out, with the neck, tail and two leg openings tied shut. The mouthpiece and chanter (finger pipe) are tightly affixed with string to the remaining two leg openings of the bag. When the bag is filled with air and the air pressure inside is increased by squeezing the bag with the arms, the air forced through the chanter produces sound. Any air leaks are stopped with bits of beeswax, and air is kept from escaping out the mouthpiece by an onionskin flap affixed on the inside with beeswax.

The chanter is traditionally passed from father to son and is inserted in the skin when a new bagpipe is made. Tsimouris' chanter, made of olive wood by his father, had two bamboo reeds. One reed had five finger holes; the other had three. To tune the chanter, he adjusted the reed lengths with a piece of string and reduced the size of certain holes with blobs of beeswax. He played standing up, wrapped his arms around the bag and kept pace by tapping his feet. By varying the air pressure in the bag, he was able to "bend" notes or ornament the basic melody with flurries of grace notes. Occasionally, Tsimouris held the air pressure with his arms while singing a line or two of a song. The music is essentially designed for dancing, and Tsimouris sometimes paced along with the dancers as he set the complex seven- and thirteen-beat rhythms.

In 1968, Tsimouris moved with his family to the tightly knit Greek community of Tarpon Springs, Florida, where he operated a stuccoing business in partnership with his son, Anonios. In Florida, the tsabóuna music he played was considered antiquated by many, but it continued to serve as a focal point for the needs of cultural preservation. Tsimouris was often invited to perform for weddings and other community events.