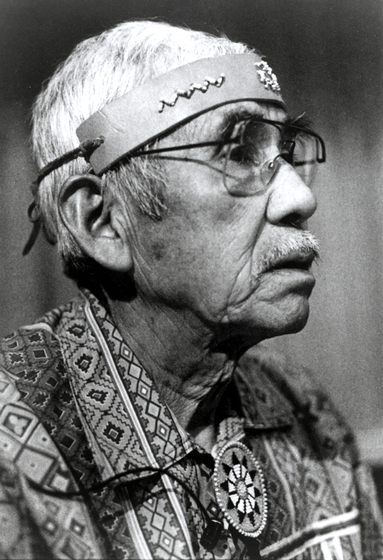 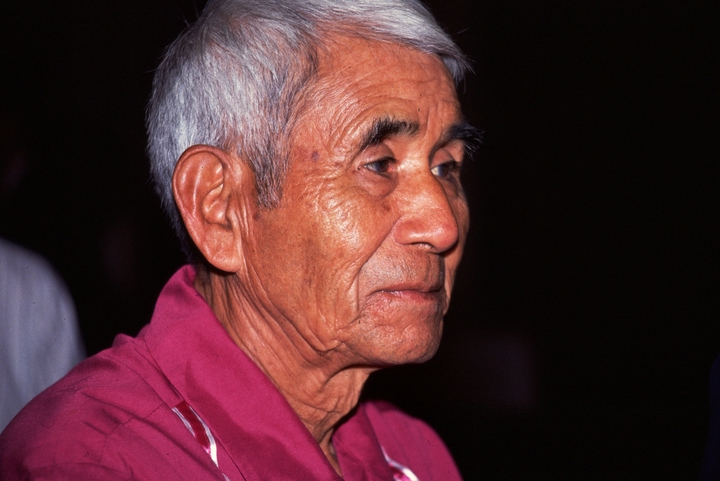 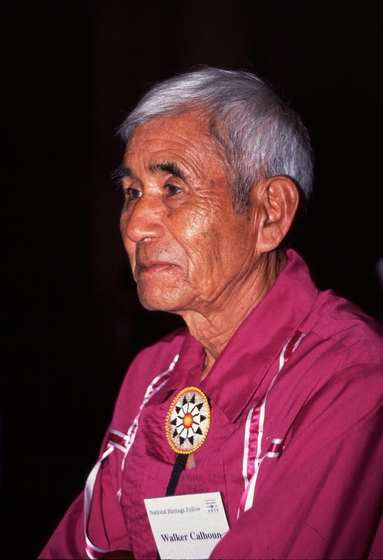 Walker Calhoun was born in the Great Smoky Mountains of western North Carolina, near the town of Cherokee. He was raised in the Big Cove community (the Cherokee name translates as "Where Ravens Be") on the Qualla Boundary Cherokee Indian Reservation. He had a difficult childhood; his father died when Walker was 9 years old, leaving his mother, Sally Ann Calhoun, to raise him and his nine siblings. The family owned about eighty acres of land on a steep mountainside. They used the scarce flat areas to grow most of their own food. The nearest town was twelve miles away along a rough dirt road.

For the first twelve years of his life, Calhoun heard only the Cherokee language spoken and sung. When he joined the armed forces in World War II, he spoke little English, but by the time he finished his tour of duty, he was fluent.

Walker recalled listening to his father, Morgan Calhoun, playing his favorite tune, "Shoo Fly," at home on a factory-made banjo. When he was 13 years old, after listening to others play the banjo, Walker started teaching himself to play using his older brother's instrument. This bothered his brother, and to keep Walker from playing his banjo, he hung it high on the wall, safely out of his younger brother's reach. But when the brother went to work, Walker pulled a chair under the banjo and climbed up to play with the strings. Soon, Walker was able to practice chords on the banjo without taking it down from the wall. Finally, he took the instrument down and played with it, but he was careful to hang it back on its hook before his brother came home.

Eventually, Calhoun taught himself to play some of the songs he heard others perform. The first tune he learned was "Cripple Creek." He developed a modified three-finger picking style, at times using metal fingerpicks, and sometimes using a drop-thumb rapping style he remembered hearing his father play.

In addition to playing the banjo, Calhoun was committed to perpetuating Cherokee music and dance. As a child growing up in the 1920s, he danced to the ceremonial singing of his uncle, Will West Long, a singer, medicine man and leader of ceremonial dancing in Big Cove from about 1904 until his death in 1947. Dances and songs celebrated almost every aspect of life for Calhoun's family and his Cherokee neighbors. From harvest and hunt to spiritual protection, the songs validated and strengthened everyday living. They provided the dance rhythms for both social and sacred dances or expressed grief about a shared, tragic history.

In the 1830s, the majority of the Cherokee were forced to march from their homeland in the southeastern United States westward to Oklahoma on what became known as "The Trail of Tears." A few Cherokee families avoided the removal by hiding in remote hollows of the Great Smoky Mountains. One such hollow in western North Carolina became the home of Long's and Calhoun's ancestors.

Will West Long's singing captured the imagination of the young Calhoun, and by the time he was 9, he had learned most of Long's repertoire. Calhoun continued to absorb his elder's teachings up to his death and committed himself to becoming a cultural and spiritual leader among his people.

In the 1980s, Calhoun founded the Raven Rock Dancers with his family members to keep the traditional dances a part of his community's life. In 1982, a tape of Long recorded in 1927 by German ethnologist Franz Obrechts on a wax cylinder was given back to the Cherokee by the Library of Congress. Hearing this tape sixty-two years later further sparked Calhoun's memories of ancient songs and strengthened his resolve to keep the old dances and songs alive as his family and people faced the future.

Calhoun was widely recognized as a keeper of ancient Cherokee traditions. He frequently traveled to Oklahoma to share his knowledge with his Cherokee brethren, and in turn Oklahoma Cherokee have traveled to North Carolina to reintroduce the Stomp Dance that survived in the West. At a gathering of the Eastern and Western Bands of Cherokee in 1988 to commemorate the 150th anniversary of the Trail of Tears, Calhoun was presented the first Sequoyah Award in recognition of his contributions to the folklife of the Cherokee nation.

Most of the time Calhoun sang in Cherokee, and in addition to the traditional music and dance songs, his repertoire included Christian hymns, such as "Amazing Grace," adapted to the Cherokee language. He and other Cherokee musicians borrowed tunes from hymnbooks and sang the hymns in Cherokee. By reinterpreting the lyrics into Cherokee and applying some of the language's rich nuances, the meaning of the hymns was transformed. Calhoun sometimes accompanied himself on his banjo, especially with gospel and religious songs. In the Cherokee tradition, men do most of the ceremonial singing.

Although all the traditional dances had songs associated with them, many of the dances have been forgotten in the Big Cove community. For generations, the Cherokee, like other marginalized groups, have struggled against aggressive acculturation programs to retain their oral and performance traditions. European settlers, who considered them expressions of pagan beliefs, misunderstood such practices. Early missionaries, educators and government officials tried to "reform" the Cherokee to Anglo ways and discouraged the use of their native language and musical expressions.

Calhoun and his wife, Evelyn, had twenty-four grandchildren, many of whom have learned the traditional dances of their tribe. In addition to being a keeper of Cherokee music and dance traditions, Calhoun was a skilled medicine man.